Get to know Chris Underwood, the chef who was polishing his talent through many different establishments and is now pampering the guests at the newly opened Devonshire club in the City of London.

Where does your story begin?

My story started with my enrolment into the catering college in Luton called Barnfield. This was a two years course involving many aspects of the industry including front of house, cafe, restaurant … I spent two years there and became aware that there was a 3rd year option for a specialisation in patisserie. I enjoyed making cakes at home so I decided to enrol. l completed the course receiving the "student of the year in pâtisserie” award and also became the student of the year of this catering college.

How did you learn your mastery and who were your most important tutors?

My first job was at Claire Vexent hotel as a pastry commis and lasted a year. I wanted to be the best I could be, so I looked through the Michelin and the AA guide and picked out some of the best restaurants of that time in London and the U.K.
I was very lucky to get a job at Michelin starred restaurant Pied à Terre where I quickly became chef de partie running the pastry for Shane Osbourne. I worked there for about a year. 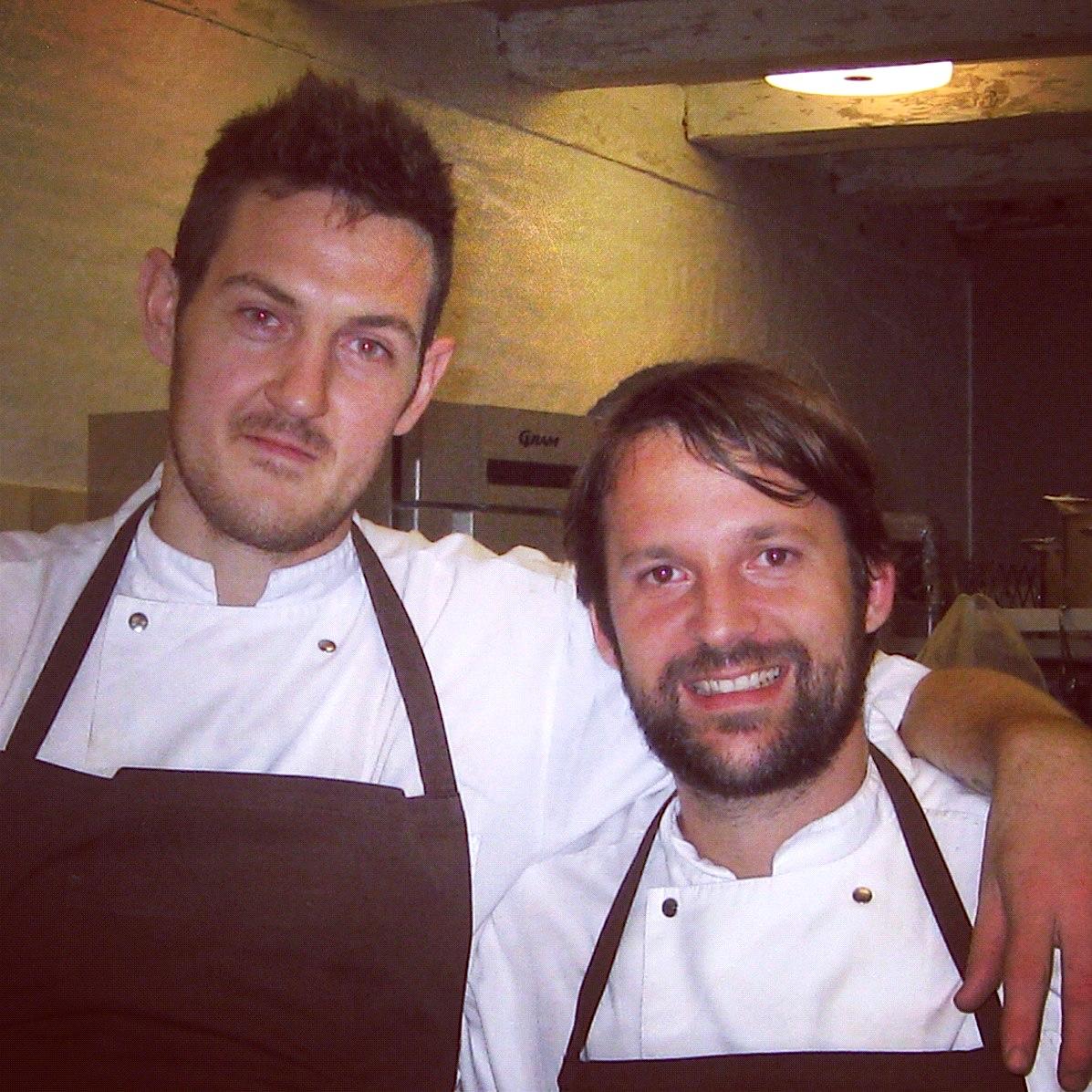 My second experience was with Eric Chavot at The Capital which was an enormous learning curve - it gave me an insight into 2* cooking of the French style.
This was an amazing year and I learnt so much about flavour and classic pastry!

After that I wanted something completely different so I went to L’Ortolan and worked for Alan Murchison for 3 years as the head pastry chef. This was a great opportunity - it was very modern at that time and a great place to work.

One and half year later I was part of the chosen team that opened la Becasse (at the old Hibiscus Ludlow site) and worked with Will Holland. We were a very small team and yet we won a Michelin star in just 9 months after the opening, which was an amazing feeling.

After this I went to work for Claude Bosi at Hibiscus in London for one year (I now love the 2 Michelin starred establishments!) and was the pastry sous running pastry. I learnt a lot from Claude about flavour profiles and how to match different sweet and savoury foods.

After Hibiscus I headed out of London to Gidleigh park in Devon, as I had heard a lot about Michael Caines and I wanted to work with him. I learnt a lot about classical flavour and fine lightness of touch. He was so inspiring to watch - he had a car accident and lost his right arm and yet still managed to obtain 2 Michelin stars. This was one of my favourite places! I worked there as a chef de partie and stayed 2 years. I have lots to thank him for.

After Gidleigh I went to London again and got a job at the Langham as the pastry sous chef. I wanted to expand my knowledge of patisserie and learn the hotel pastry creations under Cherish Finden. This was a great place as it was back to basics - the proper pastry.

After this I went back to a Michelin starred restaurant. I missed it so I got a job at Tom Aikens’ flagship restaurant in Chelsea as Head Pastry Chef. This was an amazing place - Tom is one of the most demanding and obsessive chefs I ever worked with. We had a great relation and I took part at a few events with him including cooking for the delegates and MP and presidents. We also did a pop up at the Royal Festival Hall with Electrolux called "The Cube “. I stayed for two unbelievable years. He is without doubt one of the best chefs of this country. His attention to detail and work ethic are mind blowing.
He was a strong influence for my skills and talent.

My next step was opening the Five Fields restaurant where I stayed 2 years as the Head Pastry Chef. I worked there for two years and we were awarded 3 rosettes.

I left the Five Fields wishing to expand my pastry knowledge and to learn new things.

I took a break and helped my friend Lee Westcott at the Typing Room for 5 months until I found myself as the Head Pastry Chef at Fera in Claridge's where I stayed one year. 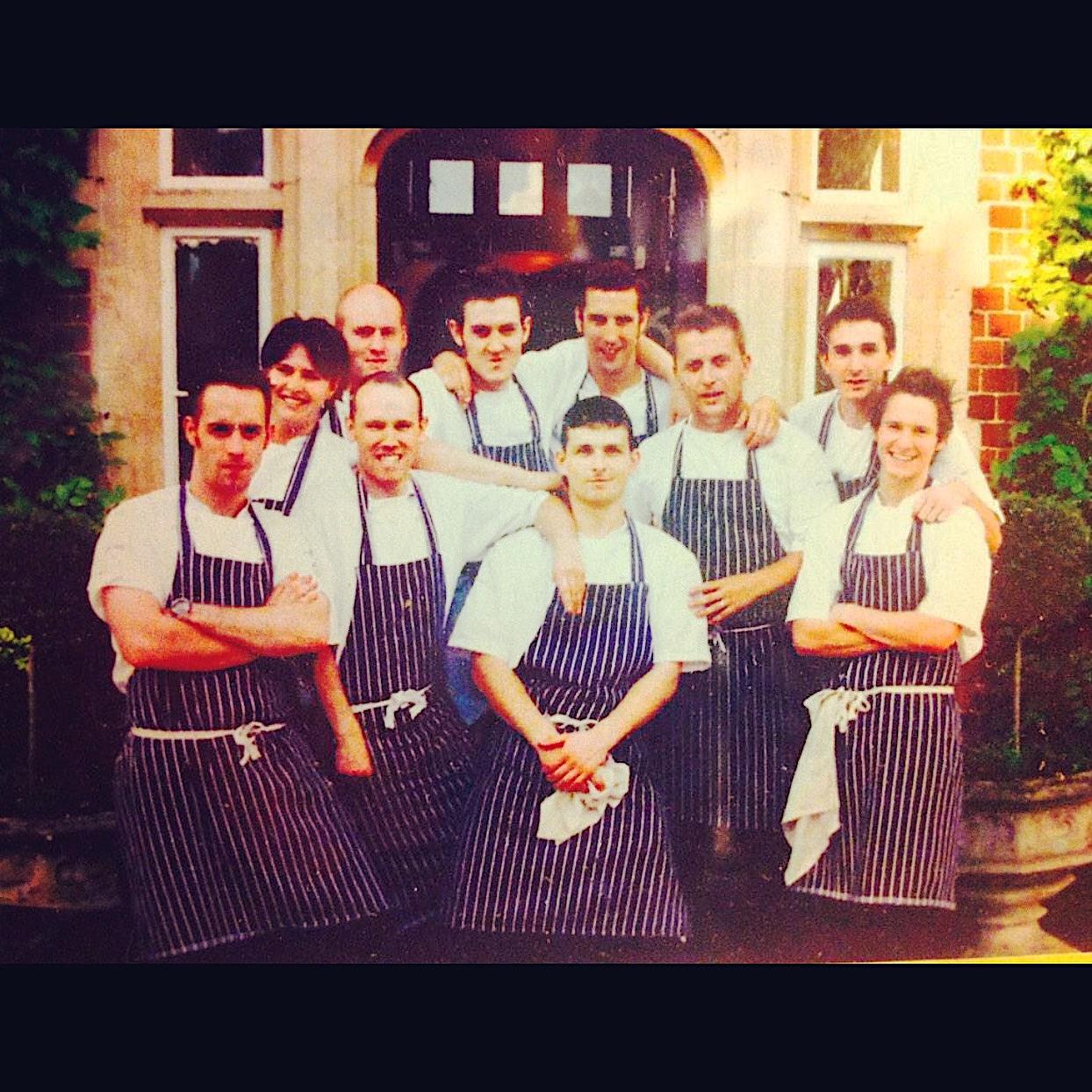 What was the most important lesson you got?

The most important lesson I got through my career was to never give up as you can always do more. You can learn your craft as much as you are ready to learn and the rewards that follow later in your career pay off everything you invested.

You worked in different places and with different chefs - which chef gave you the greatest freedom and which challenged you most?

The chef that gave me the greatest freedom was Taylor Bonneyman (chef patron of the Five Fields) who is also my dear friend.
The chef who challenged me the most was Tom Aikens - he was so demanding in every aspect. He was out for blood and sweat and by God he got it! 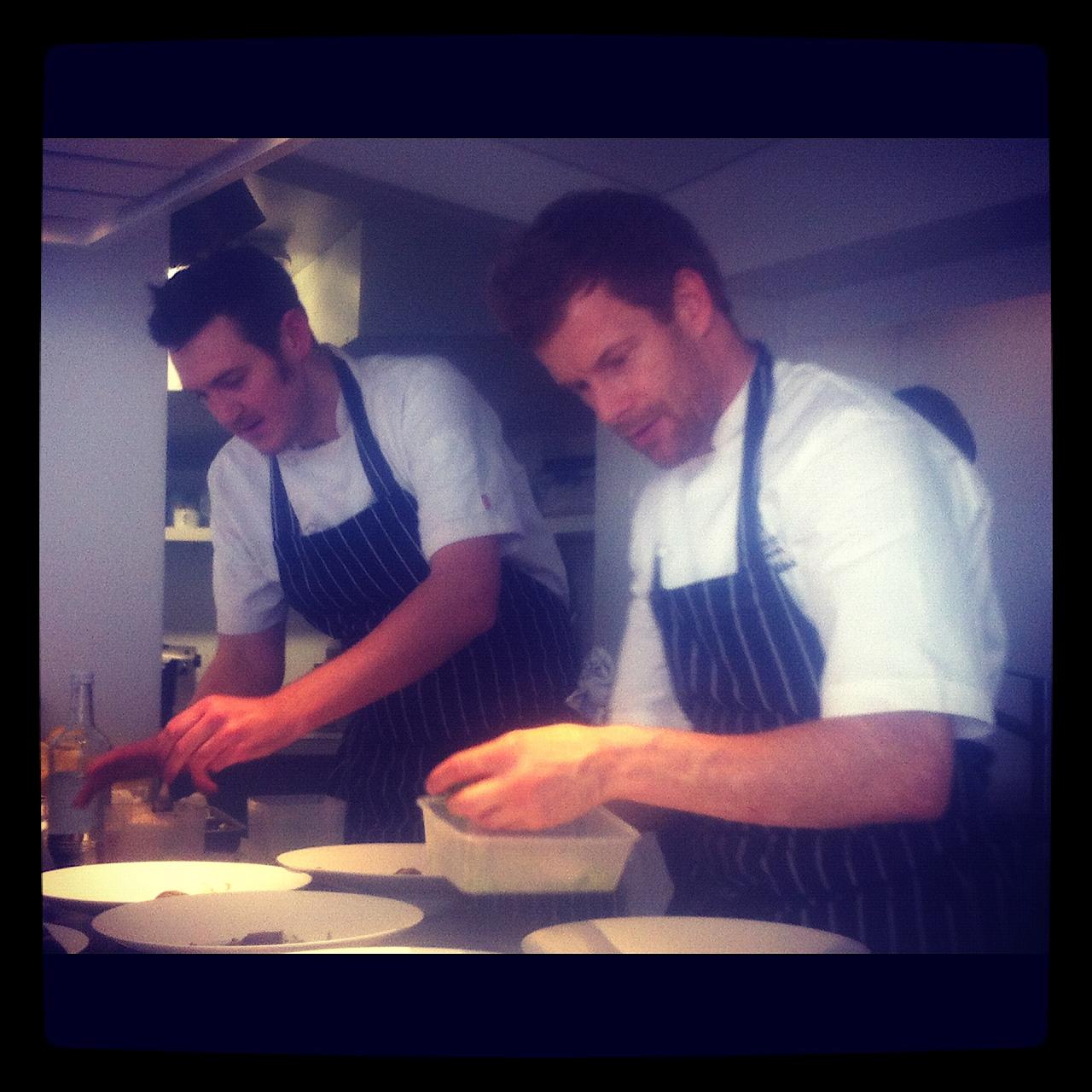 Were your experiences only in restaurant pastry or also hotels, what of the two do you prefer and why?

My experiences vary between solo restaurants and hotels and if I had to say which one I prefer I would choose restaurants because there you need to be totally focused and in every moment. Food there is really driven by passion and love.

In a restaurant the big challenge is that dessert comes as the last course of (often a very long) meal. It’s quite a challenge to excite the palate again after it was excited by so many great dishes. How do you cope with that?

Developing the menu is challenging - you need to create a perfect flow. I like to work by studying the dishes and eating them to see what my saliva needs,
what my body wants (chocolate, sour, sweet, fruity, refreshing)… I have developed a different style to some other pastry chefs - I am more natural in plating and I really like using vegetables in my desserts - I find them more interesting, more seasonal and also naturally sweet. 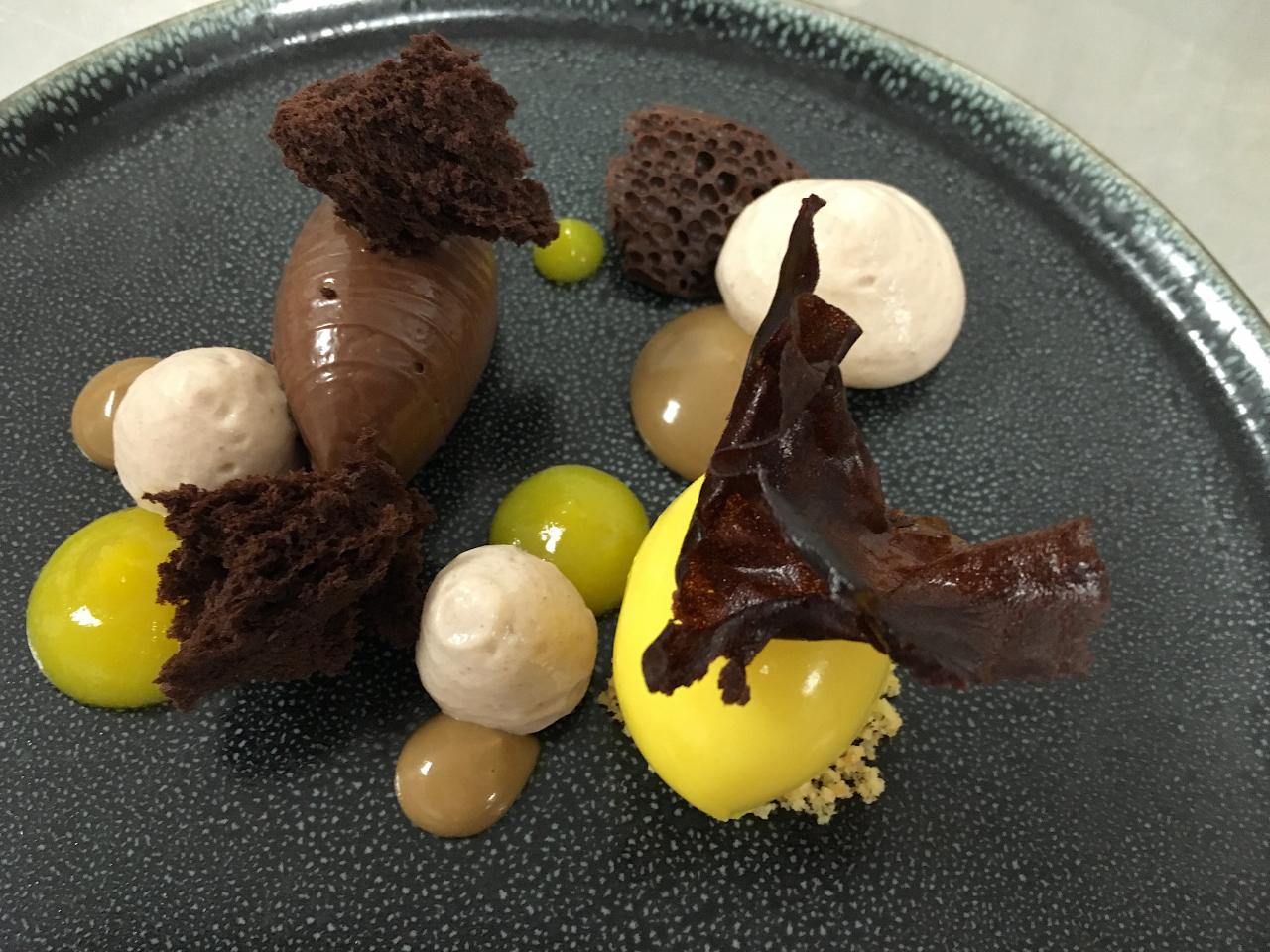 Now you are working in a private club. How can guests enjoy your desserts?

Now I work as the Head pastry chef at the Devonshire Club. We have a lunch and dinner menu and we also recently started an afternoon tea with fantastic pastries and reasonable prices.

What is your main source of inspiration?

My main source of inspiration is my knowledge and skills learnt over the years. I am using what I have and working on it expressing all I have learnt in my entire career.

I love to eat differently "out of the ordinary” desserts to explore what can be done with diverse ingredients.

How would you describe your personal style of desserts?

As I mentioned before I love creating different savoury desserts - it is a fantastic challenge - very rewarding and satisfying.
My style is very natural -  I call it "neat but rustic!” 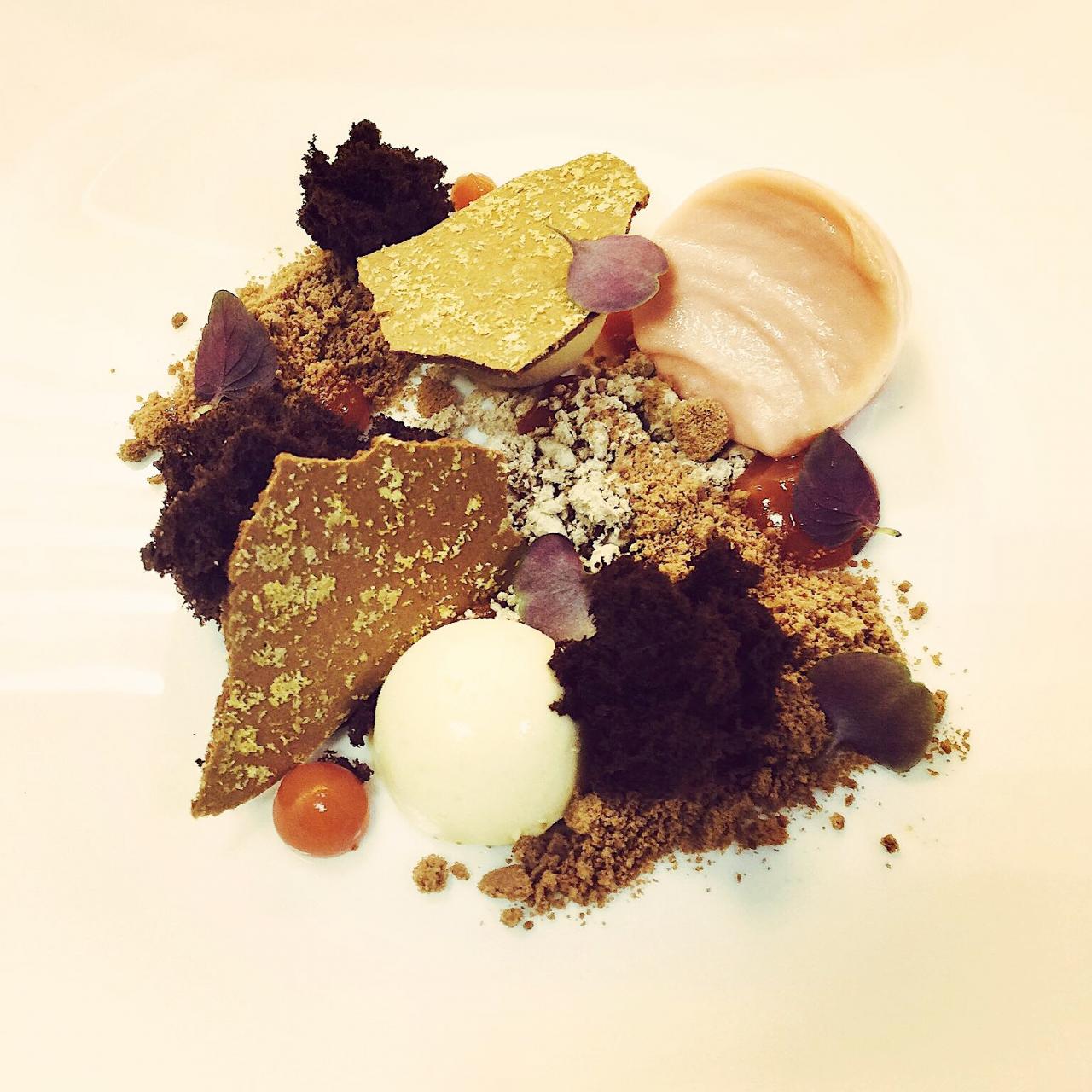 And which was the best dessert you have ever eaten? And where?

Not an easy question to answer. The one that is still alive in my mind was at Alinéa in Chicago. It was an apple balloon. It had helium in it and everything was edible, so it was more of a "how did they do that" kind, but at the same time equally tasty.

What about chocolate? How do you feel about this ingredient?

Chocolate is a very versatile ingredient and it can be worked with in many forms and ways. It can be used in all types of cooking both savoury and sweet. Every different chocolate percentage or origin has different flavour profiles, so there is always something different and inspiring.

I personally prefer the milk chocolate - it reminds me of when I was a child tasting the chocolate which would just melt in my mouth.

Cocoa Barry is a chocolate which offers great quality for a great value. In some other brands are the cocoa solids replaced with hydrogenated fats, Cacao Barry instead keeps it real. I find very interesting the Cacao Barry’s low percentage chocolates available in the dark range.

My perfect chocolate dessert needs to be created with different textures. I love to feel the chocolate versatility in many forms and styles, so when you eat it you are really taken on a taste journey.

Recently I created a chocolate and pea dessert using fresh garden peas, white chocolate, a coconut sorbet and frozen powder. The flavour profile is amazing with just a little hint of mint. I discovered this pairing whilst on a culinary journey in Australia at a restaurant called Tetsuyas - it was a simple chocolate mousse with peas which inspired me to create something different.

What should we try if we visit you at the Devonshire Club?

You should try our smoked chocolate crémeux, chestnut foam and mandarin dessert with aerated chocolate. They are all made with the Cocoa Barry 55% Excellence dark chocolate and are delicious.