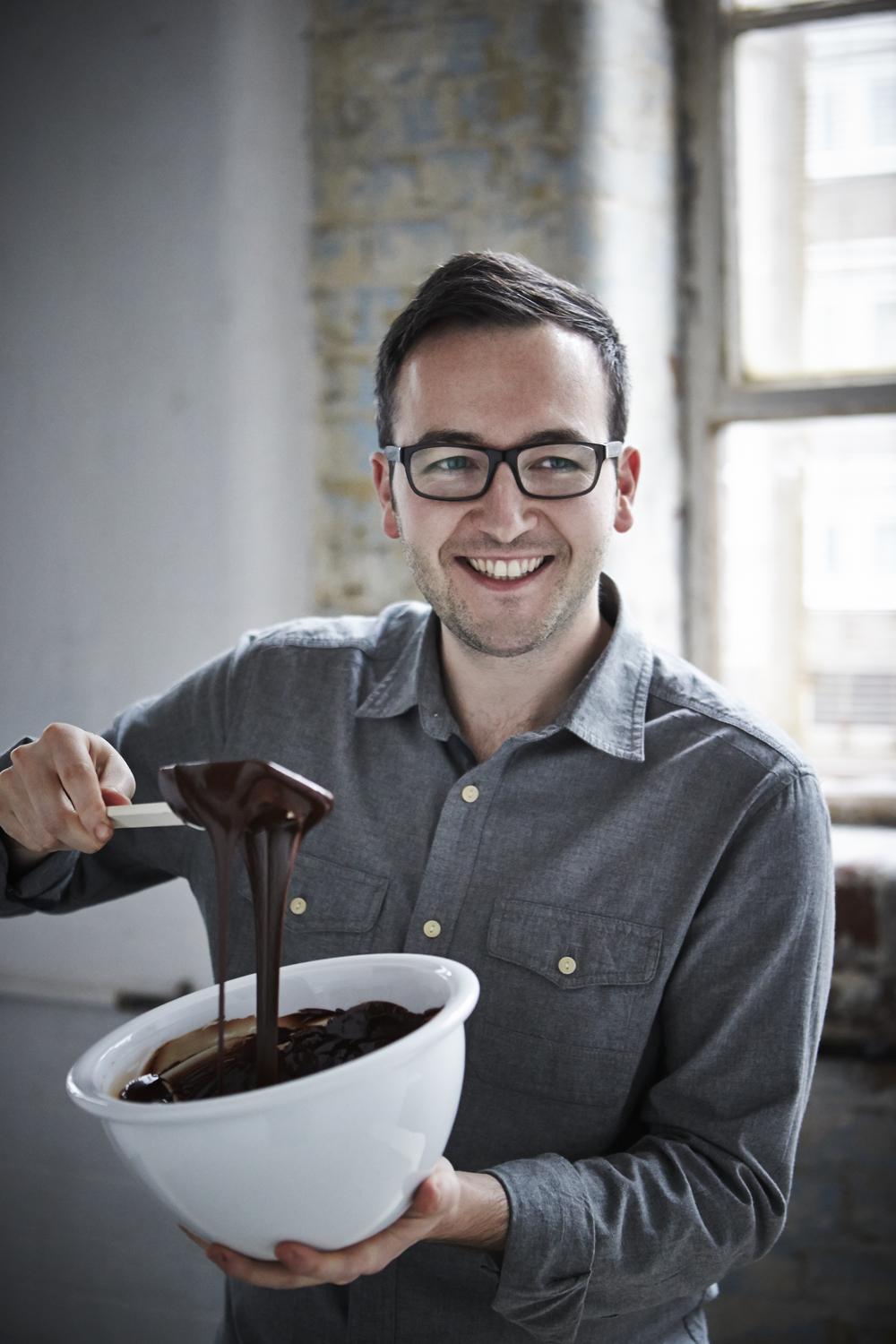 In Will Torrent’s CV it says “Will Torrent began his career with a week with Heston Blumenthal at the age of 16. In 2007, following a First class Honours degree at the University of West London, he won the first Medallion of Excellence for a British Pastry Chef at WorldSkills Japan aged 21, he won the Royal Academy of Culinary Arts Annual Award of Excellence, then Young Chef of the Year in 2009, Acorn Scholar 2010 and the WorldSkills UK Outstanding Achievment Award 2012. He is a consultant pastry chef to Waitrose, Global Ambassador for Cacao Barry, WorldSkills UK  as well as being a member of the Craft Guild of Chefs, Academy of Chocolate and Guild of Food Writers. In 2013 he was inaugurated as a Patron on the world renowned London School of Hospitality, Tourism and Leisure at the University of West London. In 2014, Will was celebrated as one of the brightest prospects in the hospitality industry under the age of 30 at the Acorn Awards 2014.” … but this is just a small part of it. What is important to know is that Will is a very passionate, hard working, supportive and humble human being and this is, beside his great talent for pastry and chocolate, a very strong quality which opened the doors of success to him already at such young age . 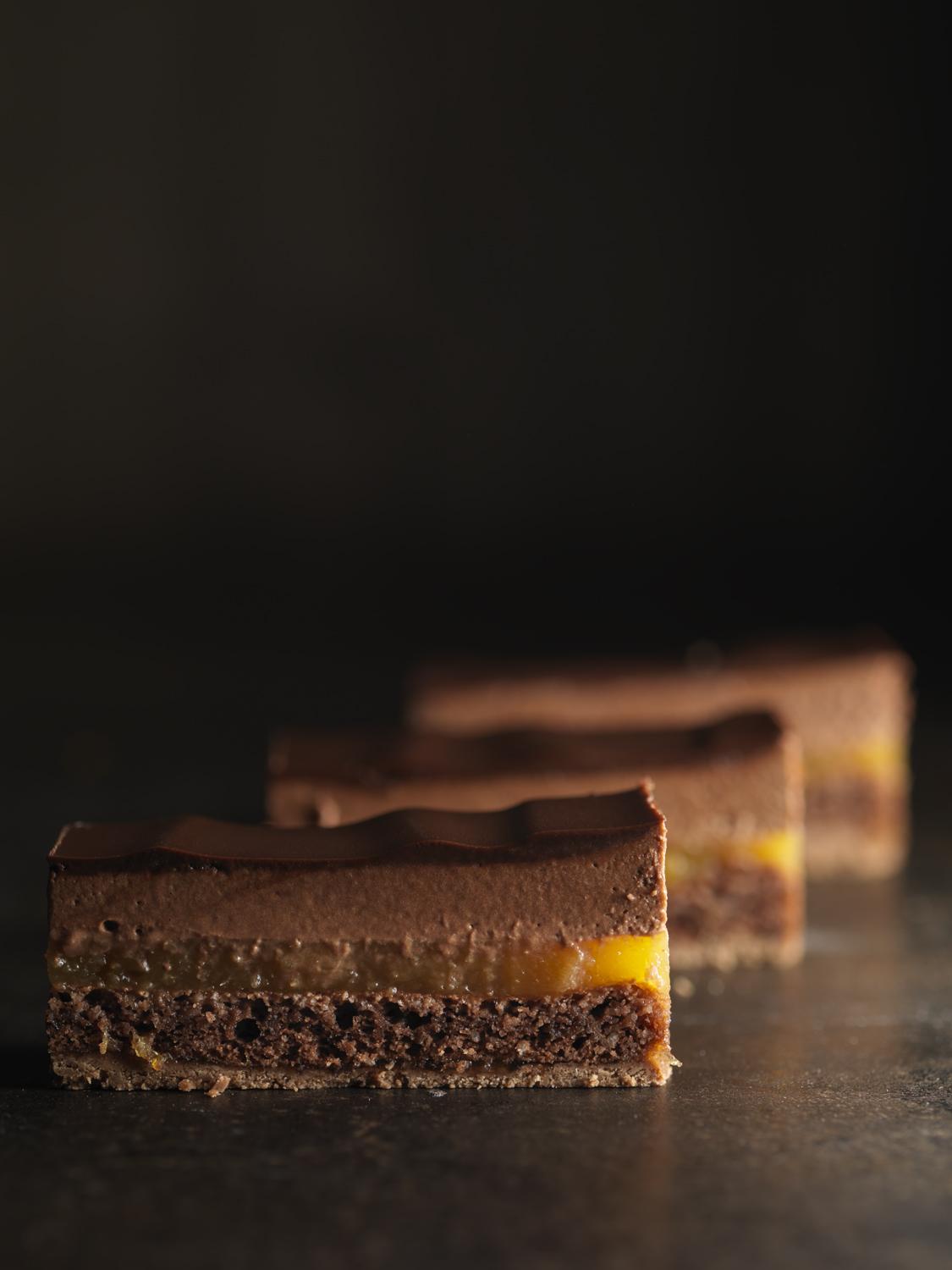 When and how did you fall in love with pastry and chocolate to become a pastry chef?

I always knew I wanted to be a chef, and always had a sweet tooth, but it wasn’t until I was training at the University of West London that I discovered pastry and chocolate and something just clicked. I understood it more and found I could express my self more through the sweet side of the kitchen. Many thanks go to the expert teaching from Yolande Stanley MCA who later became my training manager for WorldSkills Japan 2007 and now a truly great friend.

Where did you learn your art?

I trained at the University of West London where I learnt all aspects of being a chef and it was here that I had the chance to work in some of London’s finest kitchens including The Dorchester, Claridges and The Lanesborough to name a few. It was also here that I trained for WorldSkills Japan 2007 spending many extra curricular hours working on my tasks for the competition. 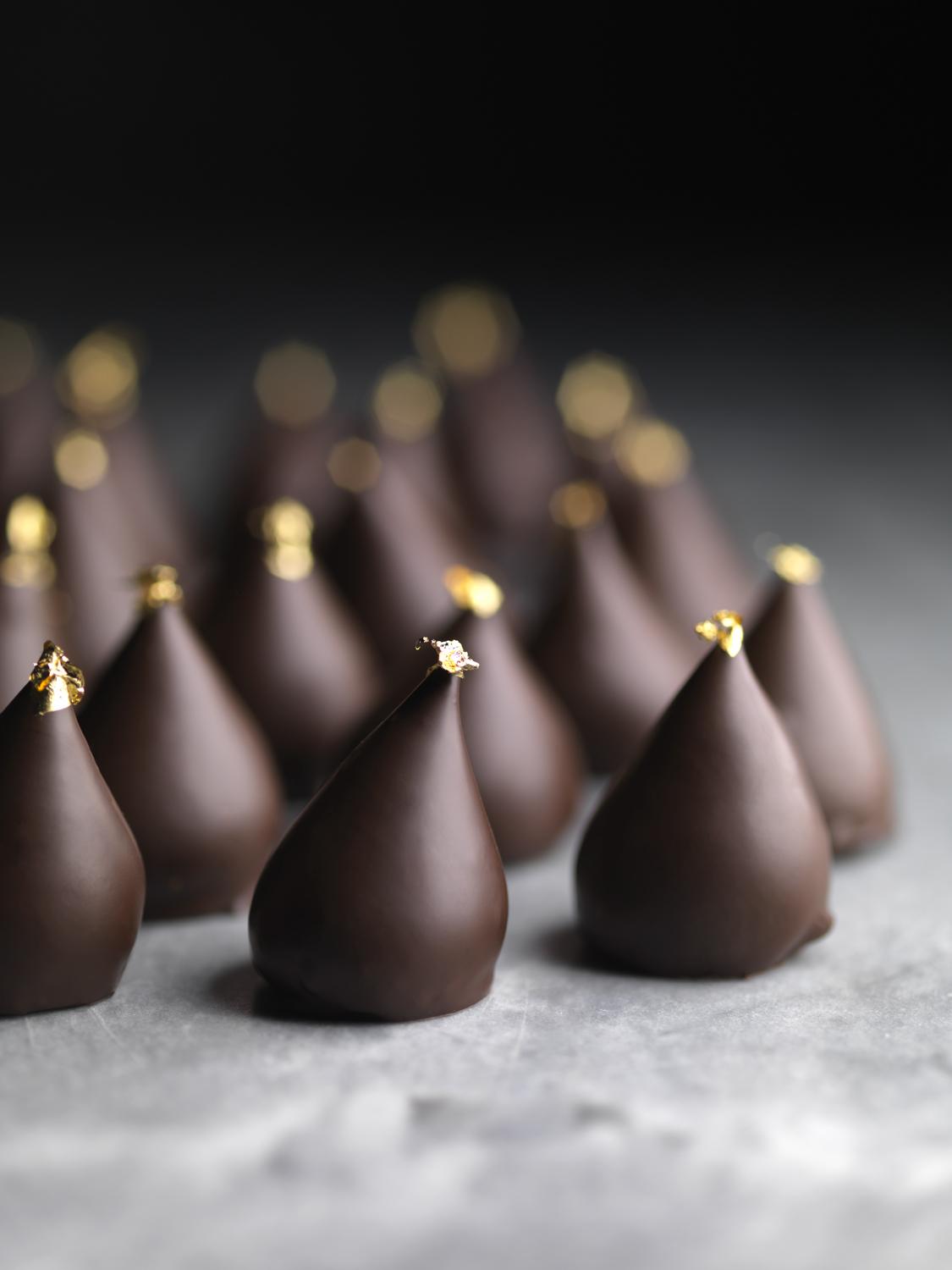 I seemed to grasp things quickly especially the likes of making chocolates, tempering and so on and I think this is due to the passion I had and have even more of now. I think the difficulty came in the repetition of said tasks and making everything always looking exactly the same.

Without doubt, Yolande Stanley MCA – from the word go, I felt I could learn so much from her and luckily for me, she took me under her wing, with my willingness to learn and develop my skills further. 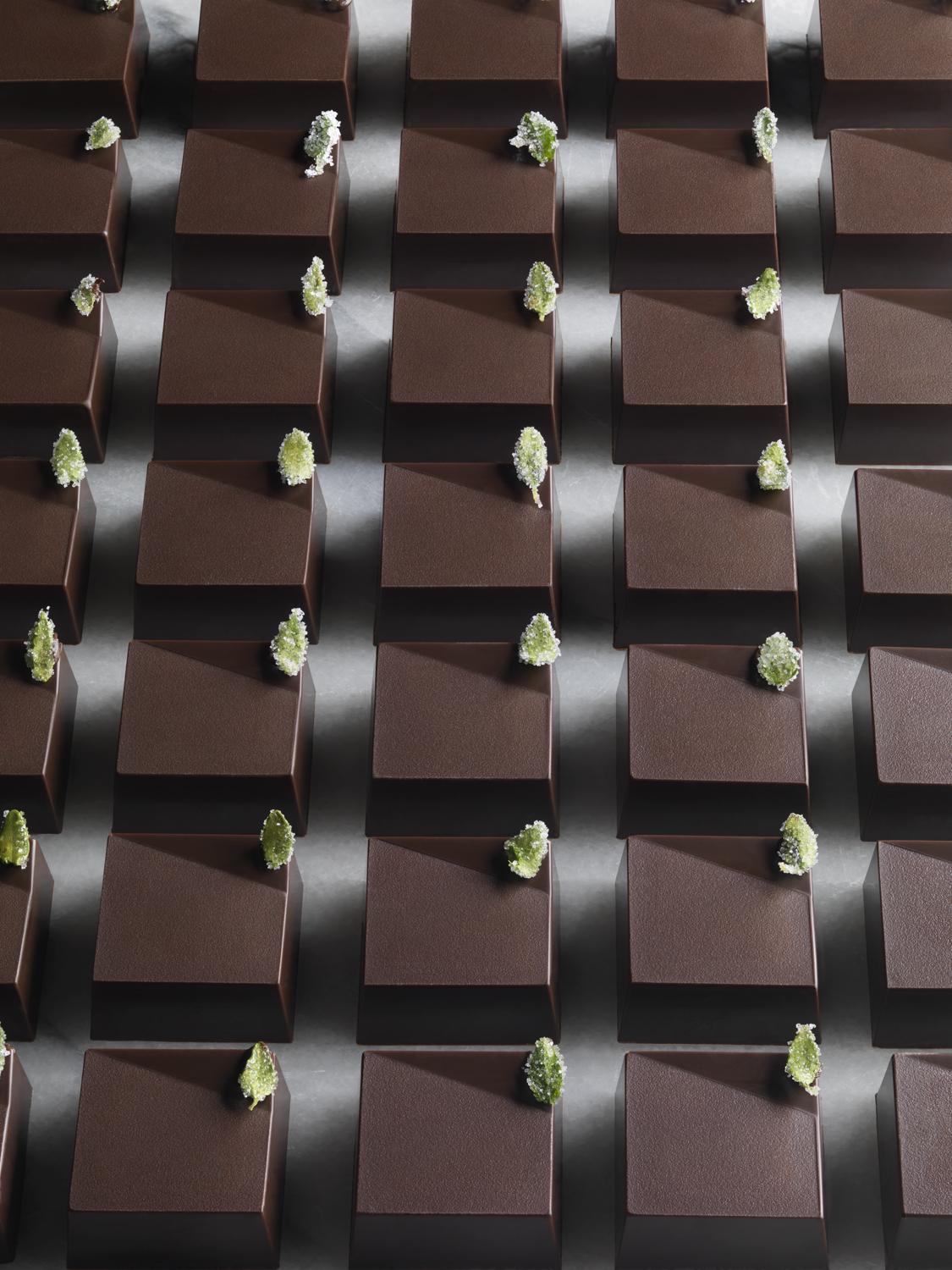 What was your most valuable experience?

I’m lucky to have so many but I think it goes back before I began training to be a chef. When I was 15, and still at school, I had the opportunity to have a week’s work experience at The Fat Duck, shadowing Heston and the team. My first ever week in a professional kitchen and it was probably the moment that made me realise for sure that I wanted to be a chef and follow this dream. I got to work on all the sections, but it was Heston’s words at the end of the week that have stayed with me since; “Will, if you want to be the best, then the only person that is going to stand in your way is you…so just do it!” We’ve always kept in touch and since 2011 I have had (as he puts it) “the unenviable task” of developing many of his delights for Waitrose.

What was your greatest challenge ever?

Competing at WorldSkills in 2007 in Japan representing the United Kingdom. Two years of hard work, time and training culminating in competing against 16 other pastry countries, at the largest skills competition in the world, the sole UK pastry chef representing the country, competing in many different tasks including chocolates, afternoon tea pastries, marzipan modelling, chocolates, desserts, entremets gateaux and a sugar show piece over four days. By the end of it, I had beaten France, Germany and Switzerland and became the 6th Best Young Pastry Chef in the world and the first British pastry chef to win a coveted Medallion of Excellence. 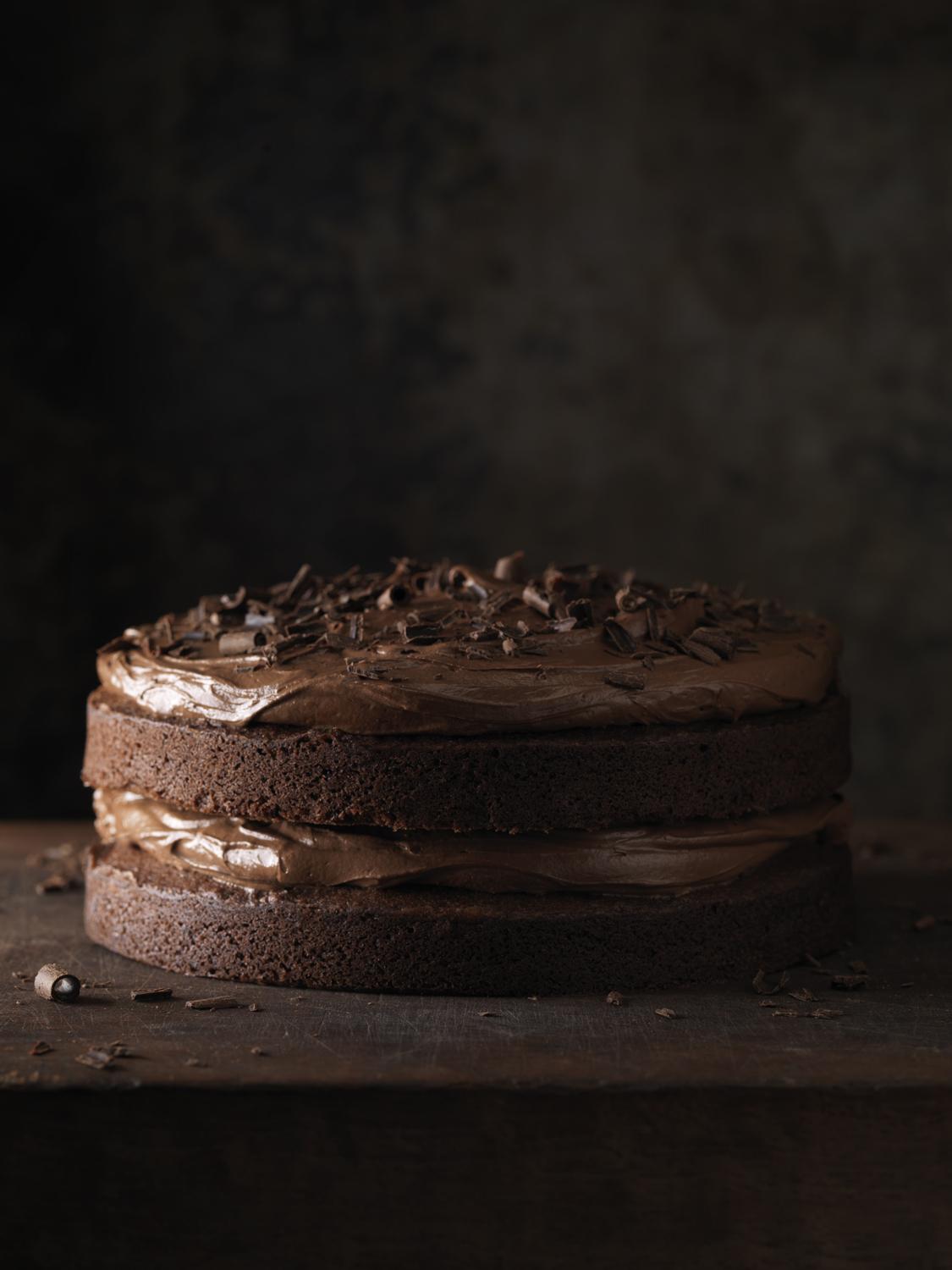 Do you have any special memory related to chocolate?

When I was young, my Nan always baked the most wonderful, yet simple, chocolate fudge cake. The most delicious chocolatey cake sandwiched and topped with chocolate fudge icing – I always remember not being high enough to reach the top of the worktop, but always wanting to help and lick the bowl and wooden spoon of course.

What is inspiring you today?

I take a lot of inspiration from nostalgic flavours and many of my recipes take inspiration from classic desserts, cakes and puddings but perhaps using them in different recipes of ways of presenting them.

What is your relationship with chocolate?

I eat chocolate every day so I would say very good! Since writing my second book “Chocolate at Home”, I’ve become increasingly more passionate about chocolate and this is now where my future lies. 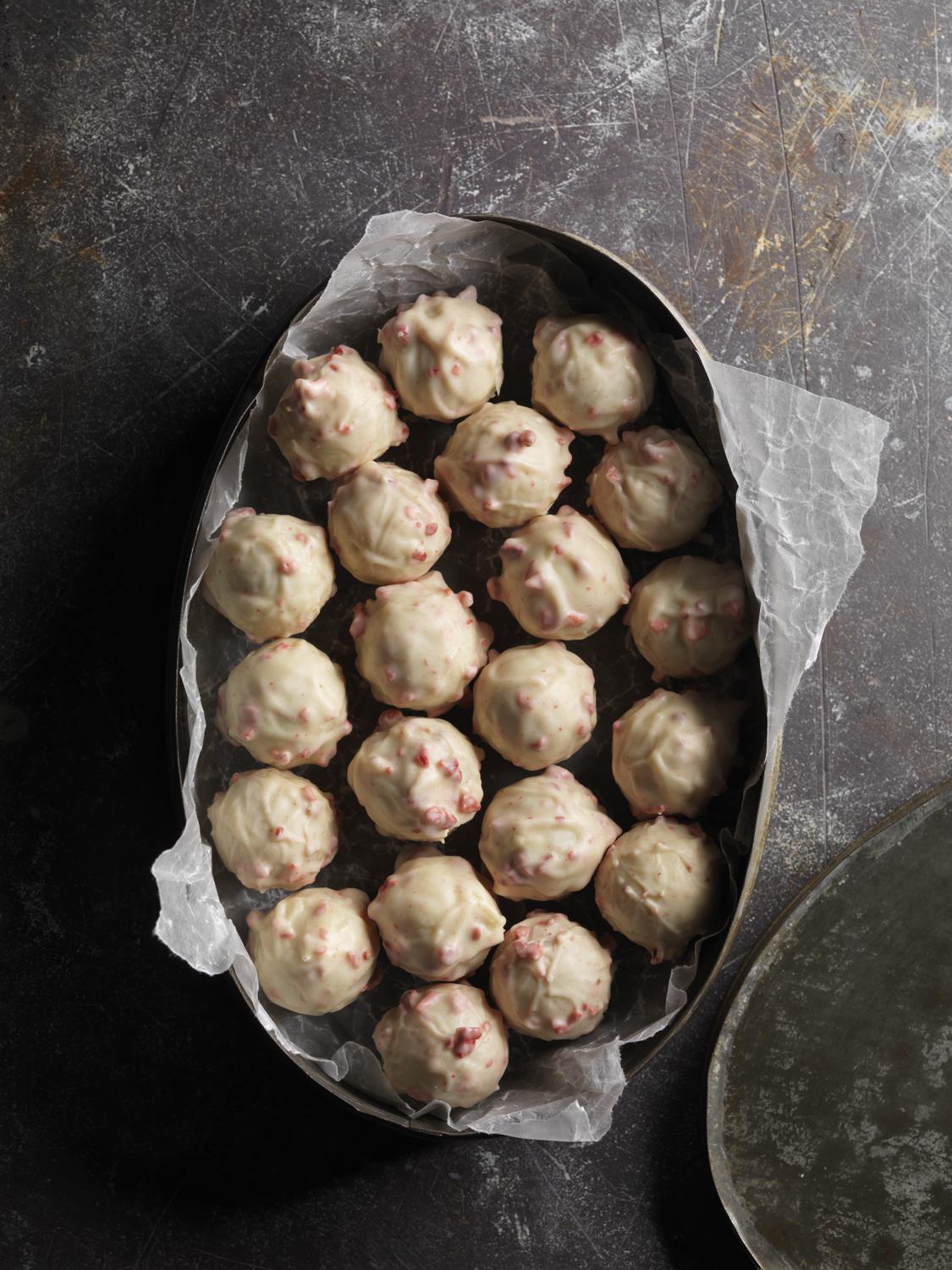 Which are your favourite flavours and why?

This is a really difficult question because I have so many. One flavour combination I love at the moment is the American classic; Peanut Butter and Raspberry. I’ve always loved the flavours but recently I seem to be putting it in everything from brownies, to chocolate bars, to macarons – even Viennese whirls! I also have to say how much I am enjoying the new Cacao Barry Purity from Nature range! The flavours of cocoa are so pronounced due to the new way of fermenting the beans. I particularly like the Alunga Milk chocolate … beautiful …

Which chocolate desserts are you working on now and which is your favourite and why?

Myself and my very good friend and current UK Chocolate Master Alistair Birt are designing a dessert at the moment to be used at a fundraiser in Scotland in a couple of month’s time and we are looking at taking the flavours of the classic Cranachan dessert and using those as basis to our dessert. We have the flavours of whisky and raspberry as the two major flavours and we know that they go so well with chocolate and two of my favourite flavours too. We’ll be using Cacao Barry’s Saint Domingue chocolate in the dessert because of its natural red fruity flavours which will work really well the raspberries. 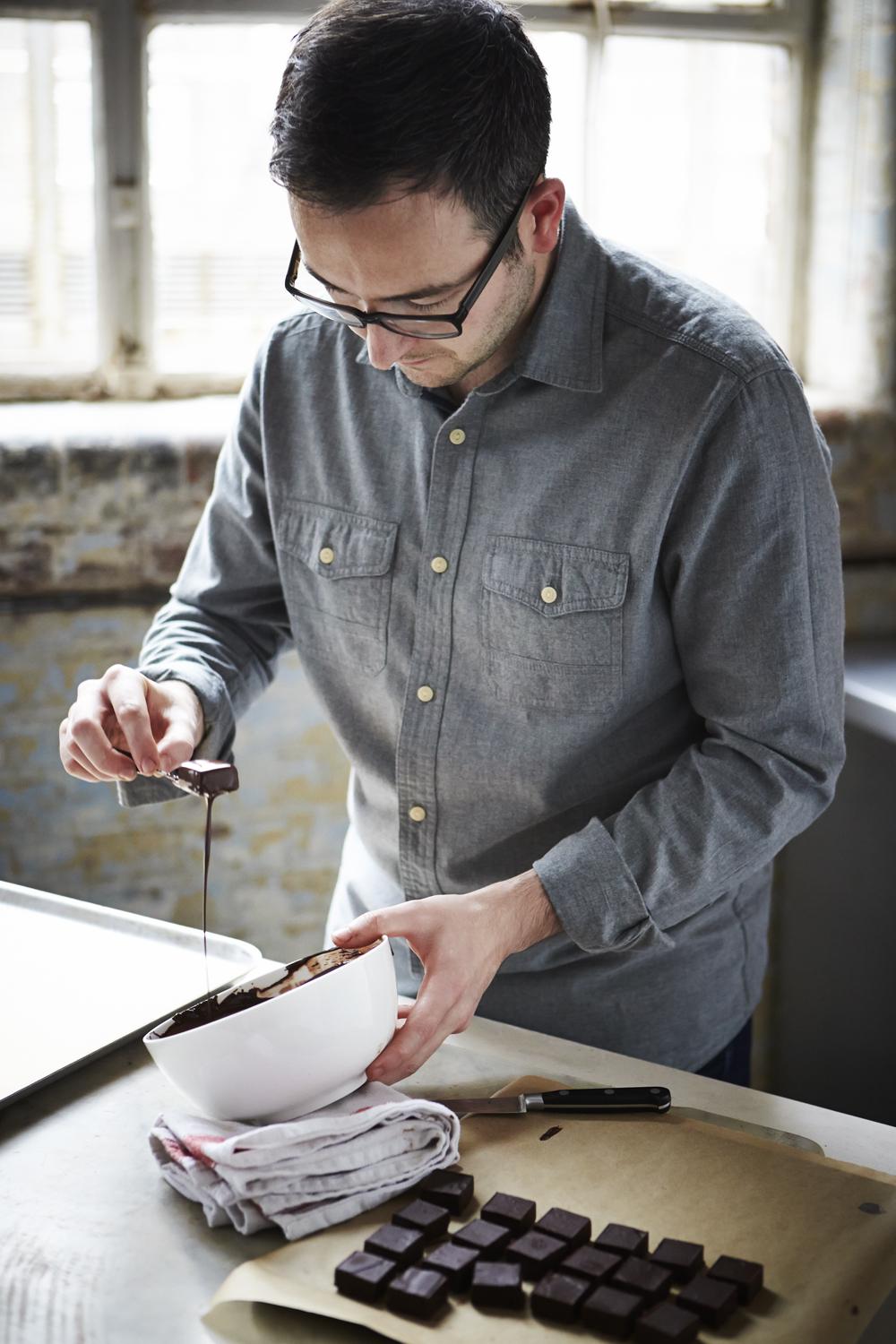 In any form – I just LOVE chocolate. As a Cacao Barry Ambassador I get treated to samples of new chocolates and these little bags are just enough sometimes to eat all at once especially couvertures such as the Alunga milk chocolate I mentioned earlier or the Saint Domingue but if Lactee Caramel arrives, I know I’m in trouble – its so addictive straight from the bag!

The best chocolate or chocolate dessert you have ever eaten?

I have very fond memories of the “BFG” (Black Forest Gateaux) from The Fat Duck…I remember during my second stage there that they had just designed it for the Perfection series and it was just going onto the menu served with Kirsch and vanilla ice cream and a Kirsch atomiser. I always loved Black Forest’s as a child so again I think this tapped into my love of nostalgic flavours made new. Another favourite was from a trip to Barcelona last year with Cacao Barry for the Global Ambassadors Summit and we were cooked for by the Roca brothers – the chocolate dessert there which was full of different textures was a joy to eat and not only because it had been made by officially the world’s best pastry chef, Jordi, also a Cacao Barry Ambassador!

If you could chose any place in the world to go and try the cuisine or pastry or chocolate, where would you go and why?

I have to say more than seeing a country for its cuisine I’d rather go to a cacao growing region and see the cacao plantations and smell the beans, in their natural environment. One of my big passions is becoming cocoa sustainability so I want to travel and learn how we can ensure we save cacao and chocolate. I tasted a new chocolate last year made using beans from Brazil tasting of coffee and grapefruit – just beautiful and I get so excited about the natural and different flavours cacao and chocolate can have. 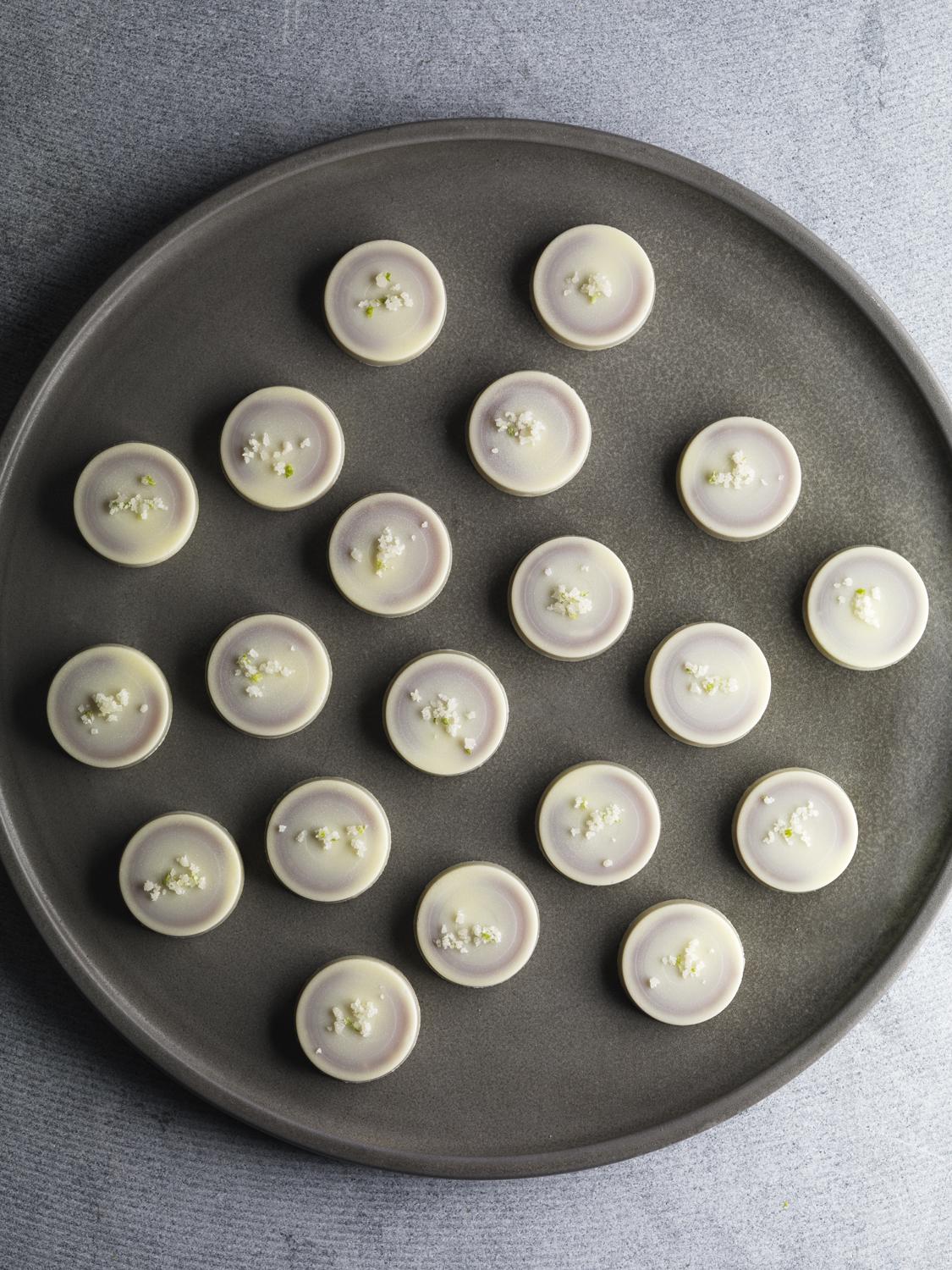 What is your greatest achievement?

I think I’d have to say representing the United Kingdom at WorldSkills in 2007 and winning the medallion of excellence, however writing two and working on a third book comes a close second.

And your ultimate dream?

To be happy in what I do, eating more chocolate and sharing my love and passion for it – the greatest ingredient in the world.

What would be your final message to our readers?

Enjoy good quality chocolate and help support farmers in the cocoa growing region but at the same time, enjoy what you enjoy – its not for me to tell  you what you can or can’t eat! 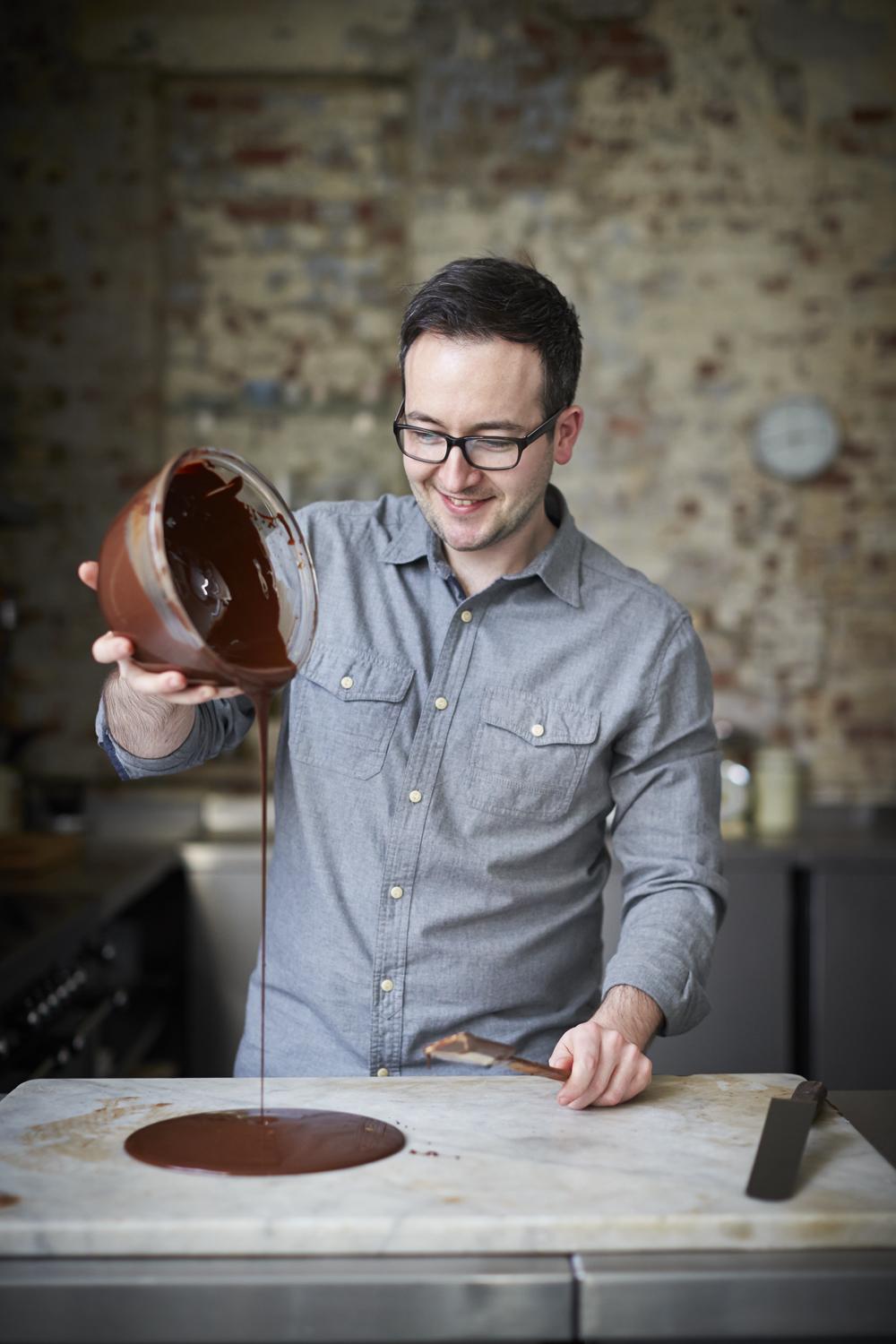