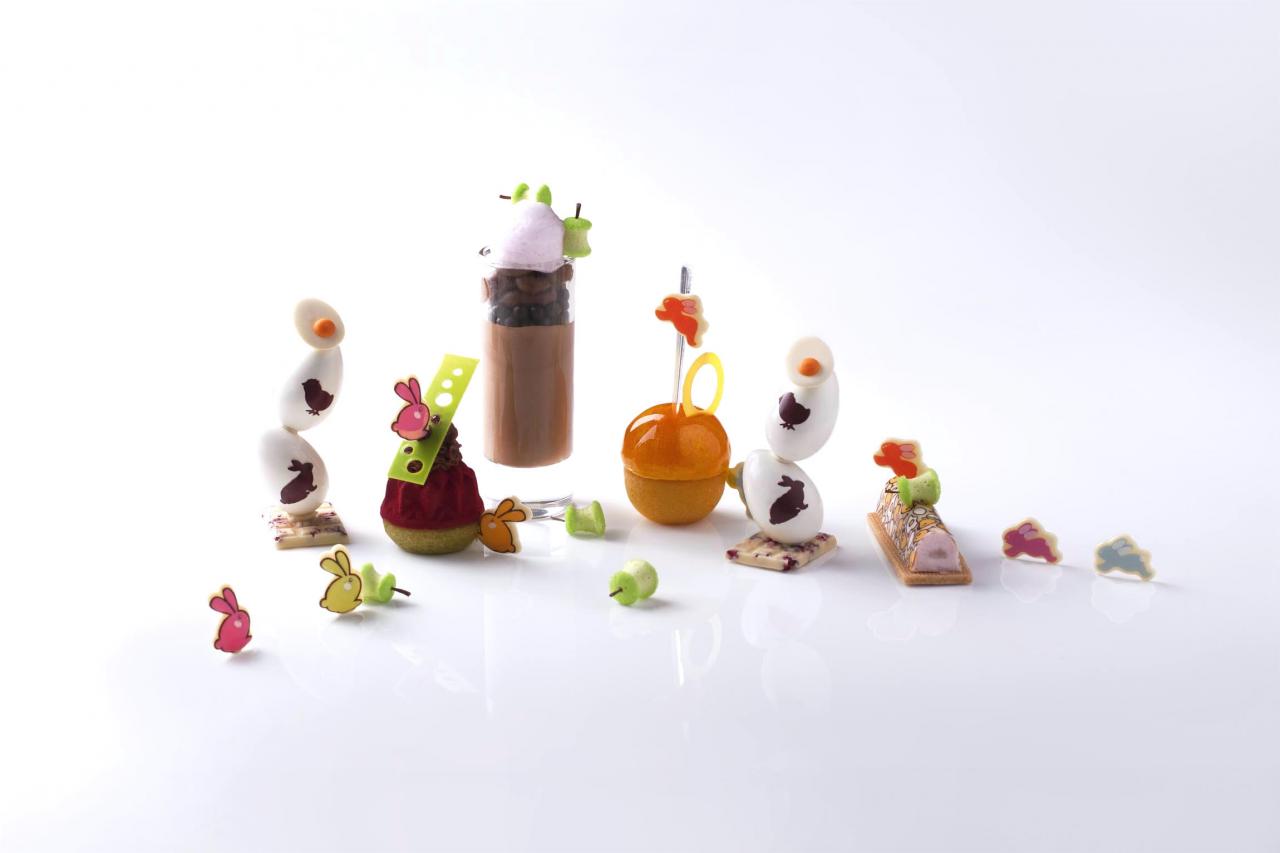 Also this year was Cherish Finden pampering the guests of the Langham hotel with the lovely EGGstravagant tea. Photo: HdG Photography

Every year chocolate is an important part of the Easter celebration.
I always thought that chocolate eggs, as part of the Easter celebration, were a modern habit introduced in the middle of the 20th Century. But I was surprised to discover that Easter eggs made of chocolate were introduced in the early 1800’s. Then, they were fairly basic, made with grainy dark chocolate and quite different from those we eat today. The first mass-produced eggs appeared in 1873, with the first milk chocolate eggs  not being introduced until 1905.

What is the connection between eggs and Easter?  During their spring festivities many ancient cultures use eggs as a symbol of new life and fertility. In Pagan times, long before Christianity took the symbol, eggs were believed to ward off evil, but they also represented life bursting forth just as spring does after a long hard winter.

In Medieval Europe, eggs were forbidden during Lent, so eggs laid during that time were boiled or otherwise preserved. Once Easter arrived, these eggs were then the mainstay of the Easter meal and a prized gift for children and servants alike. Pregnant Roman women carried an egg to foretell the sex of their unborn children, while French brides stepped upon an egg before crossing the threshold of their new homes. 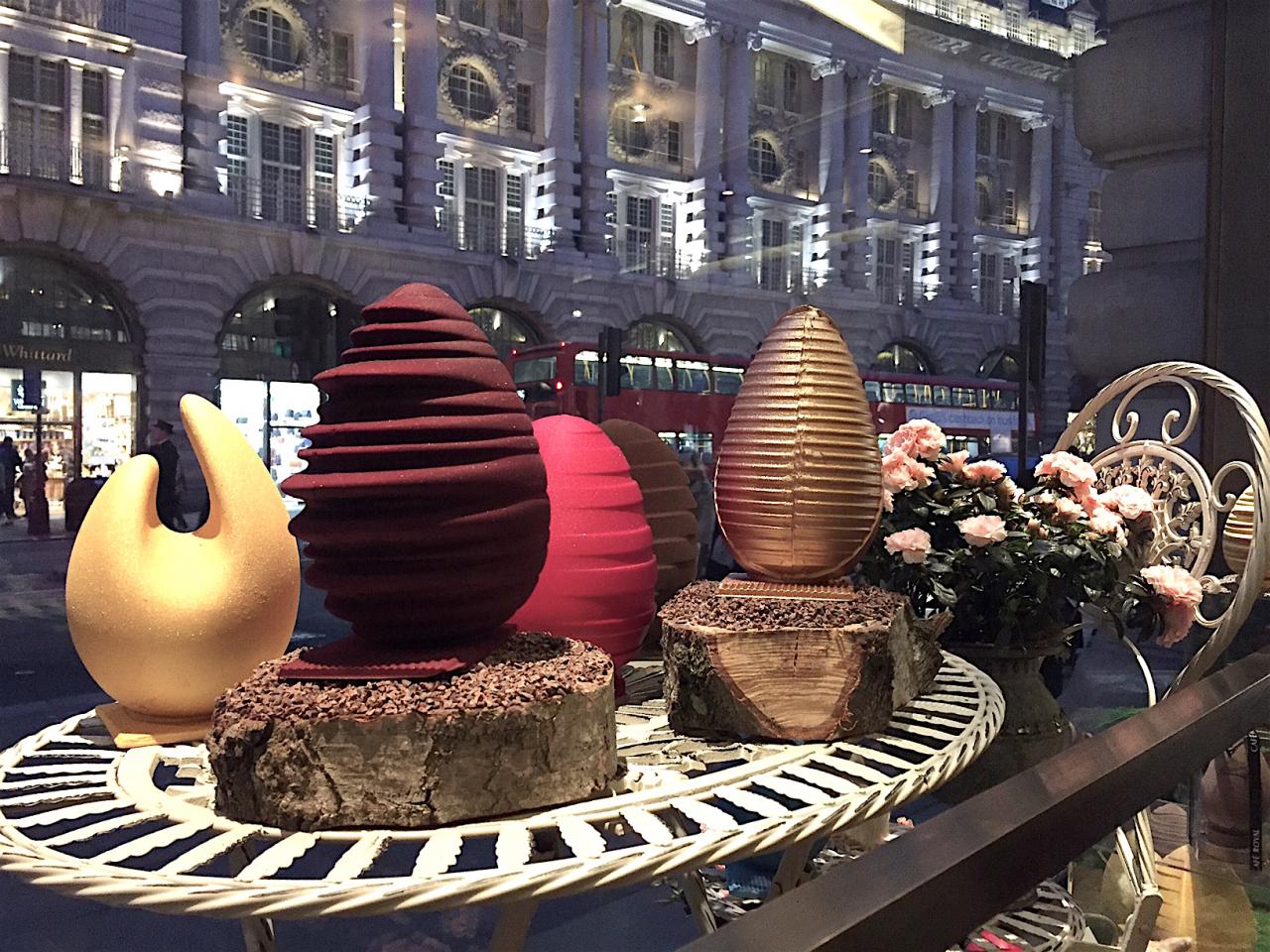 The edible chocolate window display at the Café Royal created by Sarah Barber and her team. Photo: Sarah Barber

In the 17th Century the first artificial eggs were created using various materials, which made beautiful presents. They became popular and the first manufactured eggs started to appear. The first chocolate eggs were solid, made using a paste of ground roasted cacao bean. Germany and France were first to produce eggs, but the trend was soon followed by the rest of Europe. By the 19th century the discovery of modern chocolate making processes and improved mass manufacturing methods meant that moulded eggs became the most popular gift for Easter, but it was only in the 1960's  that it spread worldwide.

Each year most British pastry chefs and chocolatiers make their own versions of Easter eggs, displays and afternoon teas. We asked some of them about their inspirations and creations….

Some of the most beautiful Easter eggs in London were created by Sarah Barber, head pastry chef at Hotel Café Royal, who finds Easter holidays very inspiring:  “Easter is a wonderful time of the year, especially for us creative pastry chefs who enjoy the opportunity to make something special. I am always inspired by chocolate and the various mediums it can be worked in, there is no end to the list of products that can be created  with chocolate. The beautiful Café on Regents street, Café Royal, is the perfect setting to showcase the skills of my pastry team and to offer unique products to our guests. I have created an edible chocolate window display based on colours inspired by spring and Easter. 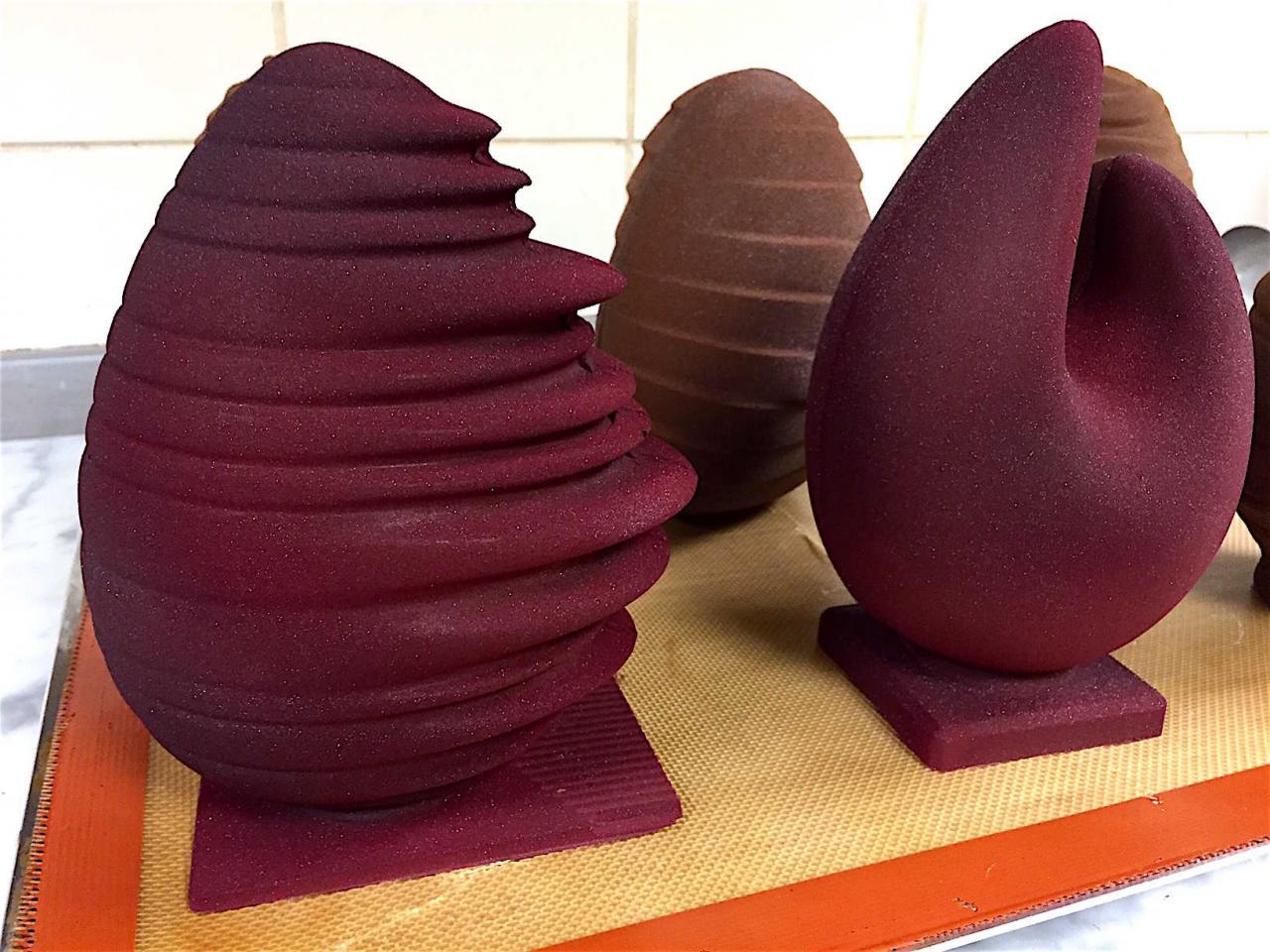 As well as this, we were also selling beautiful hand made Easter eggs made of milk chocolate shells created with Cacao Barry Alunga chocolate which were filled with salted caramel truffles rolled in gold feuilltine and popping chocolate candy. Each Egg was hand sprayed with milk chocolate and decorated with edible gold and sliver shimmer spray. The eggs were on sale for £20.” 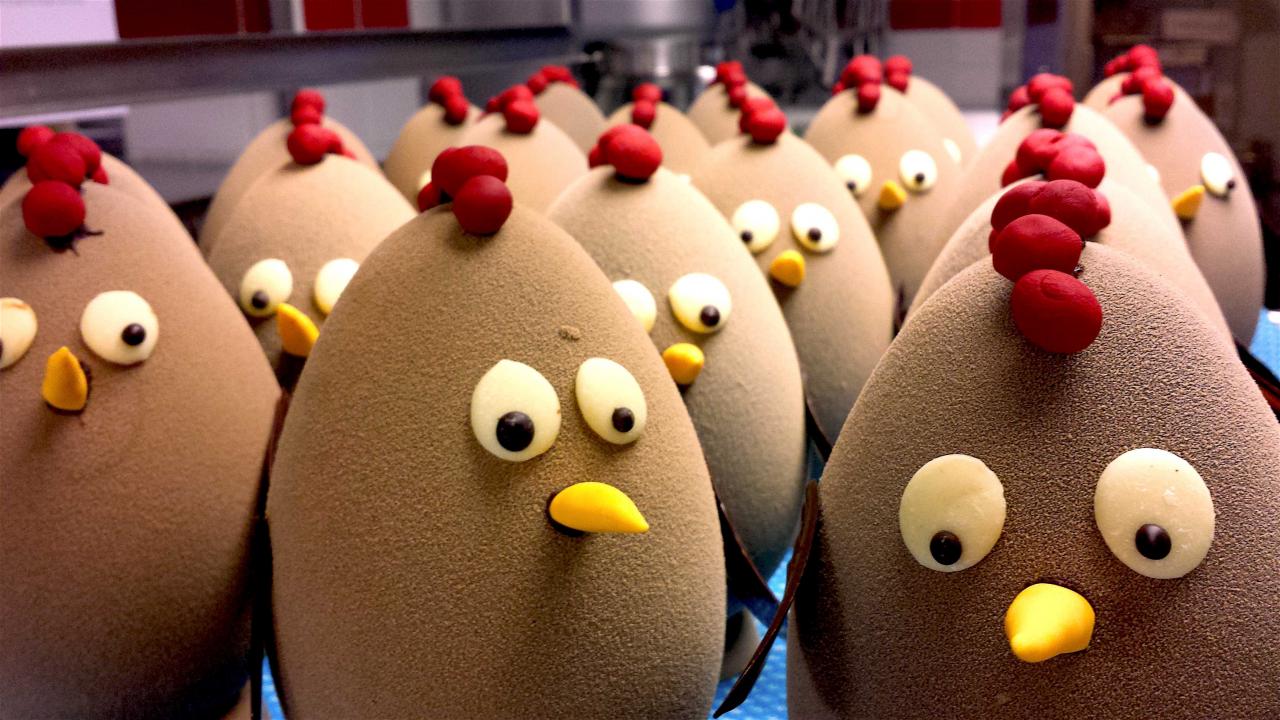 Heather Kaniuk, the head pastry chef of Mandarin Oriental is also enthusiastic:  “I love chocolate! Everybody knows that when they visit me in the kitchen I am almost always eating or working with chocolate! ;-)
For me, Easter is a bridge to spring after the long winter and it is a celebration of new life and the flowers and animals that come with the season. I wanted to celebrate this with our egg, and give our guests something that would really make them smile. Everyone who has seen our egg has definitely smiled when they saw it!

We were celebrating Easter with an Easter Afternoon Tea packed with Spring flavours including a Pink Grapefruit Tart, Rhubarb Gelee with orange and almond, Yuzu praline sesame macaron, and Pistachio and Raspberry frangipane cake.

Additionally, we offered home made hot cross buns available throughout the Easter weekend, and our special homemade Easter eggs for all our guests on Easter Sunday. Within the hotel we were hosting an Easter egg hunt for our younger guests, culminating with our Mandarin Easter bunnies made from Cacao Barry Alunga milk chocolate.”

I hope you enjoyed your Easter as much as we did. If you missed those beautiful creations this year - there is a lot to look forward in the next one. Have a great start of the new week!