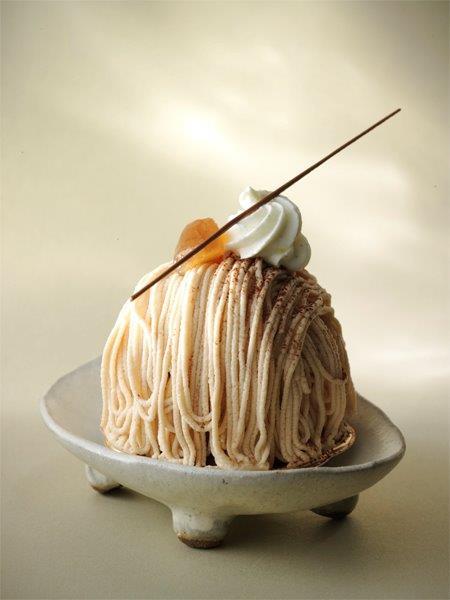 Pre-heat the oven to 140C and line a baking sheet with a non-stick mat. Mix the cocoa powder and ground almonds in a bowl. In a separate bowl, slowly whisk the egg whites by hand, gradually adding the sugar and increasing the speed. Continue whisking to a firm meringue.

Fold in the cocoa powder and ground almonds mixture into the meringue. Spoon the mixture into a piping bag, fitted with a 14mm plain nozzle and pipe out 5cm discs onto the prepared tray leaving a 3.5cm gap between each. Bake in the oven for 35-40 minutes.

Remove and cool on a wire rack. (note: you will get around 30-35 macarons from the mixture, you can freeze the extra macarons for future use)

Put the gelatine in bowl and cover with ice cold water, soak for a few minutes until soft and then gently squeeze off any excess water. Put the sugar, water and chestnut puree in a pan and bring to the boil. Add the gelatine and stir to dissolve, remove from the heat and blitz with a hand blender, then pass the mixture through a sieve.

Allow to cool, then mix in the dark rum. In a separate bowl, whisk the whipping cream until soft peaks form and then fold this into the chestnut mixture.

Transfer into an airtight container and allow to set in the fridge for at least 2 hours.

Put the milk into a pan, scrape the seeds from the vanilla and add with the pod, slowly bringing to the boil. In a mixing bowl whisk together the egg yolks and sugar until light in colour, then add the flour and cocoa powder, whisk again until smooth. Pour half of the boiled milk into the bowl and mix until there are no lumps, pass through a fine sieve, then return to the milk in the pan.

Continuously whisk until it comes to the boil and then reduce the temperature to a simmer. Continue to cook on a simmer for a further five minutes, remove from the heat and add the chocolate, mix until smooth. Pour the cream onto a shallow tray, wrap with cling film and cool rapidly.

Whisk the cream in a bowl to a soft peak. In a separate bowl, beat the chocolate cream until smooth, and then fold in the whipped cream.

Store in an airtight container in the fridge until ready to use.

In a mixing bowl, cream  the butter until light and aerated, then add the chestnut puree, beat until smooth and then mix in the rum. In a separate mixing bowl, whisk the egg whites and sugar over a bain-marie until the mixture reaches 60C. Remove from the heat and continue to whisk until soft peaks form and the mixture cools. Fold  the meringue into the creamed butter mixture.

Place the macarons onto small serving dishes. Spoon the buttercream into a piping bag fitted with a 15mm plain nozzle and pipe a 4cm bulb on top. Chill in the refrigerator for 30 minutes. Using a small palette knife, spread a layer of the chocolate diplomat cream evenly around the chestnut and rum buttercream so that is completely covered.

Spoon the chestnut mousse into a piping bag fitted with a Mont Blanc nozzle and pipe layers of the mousse on top by rotating the bag over and across the buttercream, building up three layers in total. Allow to chill for 20 minutes in the refrigerator.